Darius I to Xerxes I - Persian Silver Siglos II 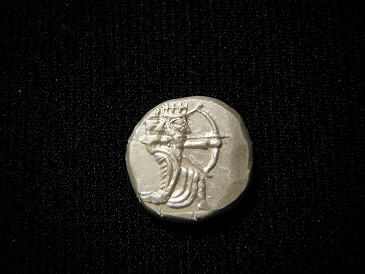 "Carradice Type II Siglos"
struck under the reigns of both Darius I and his son, Xerxes I
(505-480 BC)
Darius began a massive Persian campaign into Greece, ending with the famous Battle of Marathon. In the east, Darius was a popular ruler. He appointed and supported Ezra, a priest, to govern the nation of Israel. Darius prompted and generously funded the rebuilding of the Temple in Jerusalem (Ezra 6).

Darius' son, and husband to the biblical Esther, Xerxes I (the Great) fought and defeated Leonidas and the Spartan 300 at Thermopylae. After Xerxes costly victory, he conquered vast tracts of Greece. However, the invasion continued to suffer excessive losses from failed attacks and Greek sabotage of Persian war fleets.

The Persian 'siglos' is among the earliest coins in the world. The ancients had begun striking coinage in prescious metals en mass around the 5th and 6th centuries BC. These early 'coins' were hardly struck with precise uniformity, though weight and purity were maintained. Ancient silver bullion looked more like three-dimensional, punched, miniature ingots. An oblong punch acted as the reverse die, just enough to flatten the molten silver against the die carved with an image. The earliest Greek coins also used punch/die combinations to create legal trade metal 'coins'.

PRODUCT INFO:
- Hot struck from ~5.5g of .999 pure silver
- Just like the original ancient coins, each is hand struck, so allow for slight irregularity and variance from the photos
- Each coin shipped outside of Canada is marked discreetly with a tiny punch on the back making it a legal 'replica'