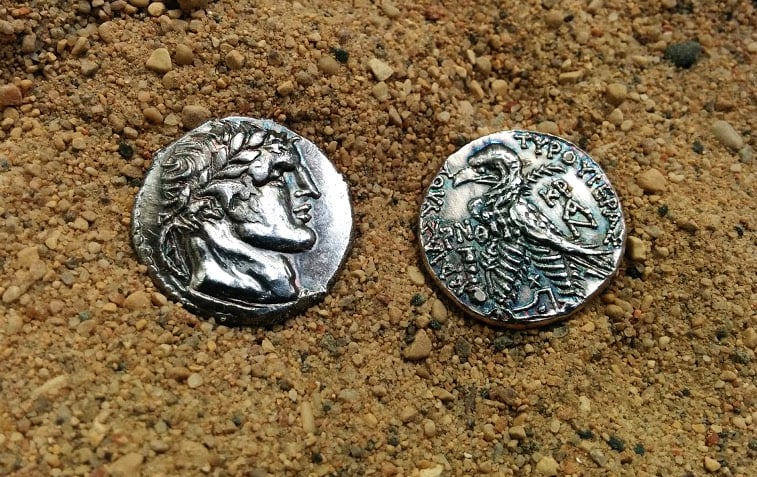 Known as didrachms (two-drachmas) or half shekels (meaning 2 drachmas/denarii), they were the second largest silver denomination common to the eastern Roman provinces. Tyrian silver was renowned for its purity which is why, despite the pagan imagery, Tyrian shekels and half shekels were used as the primary coins in Jewish Temple transactions. Each Jewish male was levied an annual didrachm/two-drachma tax to pay for the upkeep of the Temple (Matt 17:24-27). A didrachm was valued at two days work for an unskilled labourer.

PRODUCT INFO:
- Hot struck in 6-6.5g of .999 pure silver (*see 'Methodology')
- Just like the original ancient coins, each is hand struck, so allow for slight irregularity and variance from the photos
- Each coin shipped outside of Canada is marked discreetly with a tiny punch on the back making it a legal 'replica'

Obverse: Laureate head of Melqart (aka Melkart, Melqarth, or Hercules - patron deity of the city of Tyre).

Reverse: ΤΥΡΟΥ ΙΕΡΑΣ ΚΑΙ ΑΣΥΛΟΥ (Tyre the Holy and Inviolable City), eagle standing on stylized ship's prow, palm branch over shoulder. Date to the left of the eagle as PNΘ (Year 159 of Tyre = AD 33/34), stylized club below. KP (short for KAICAPOC [Caesar]) right of the eagle with moneyer's mark below.