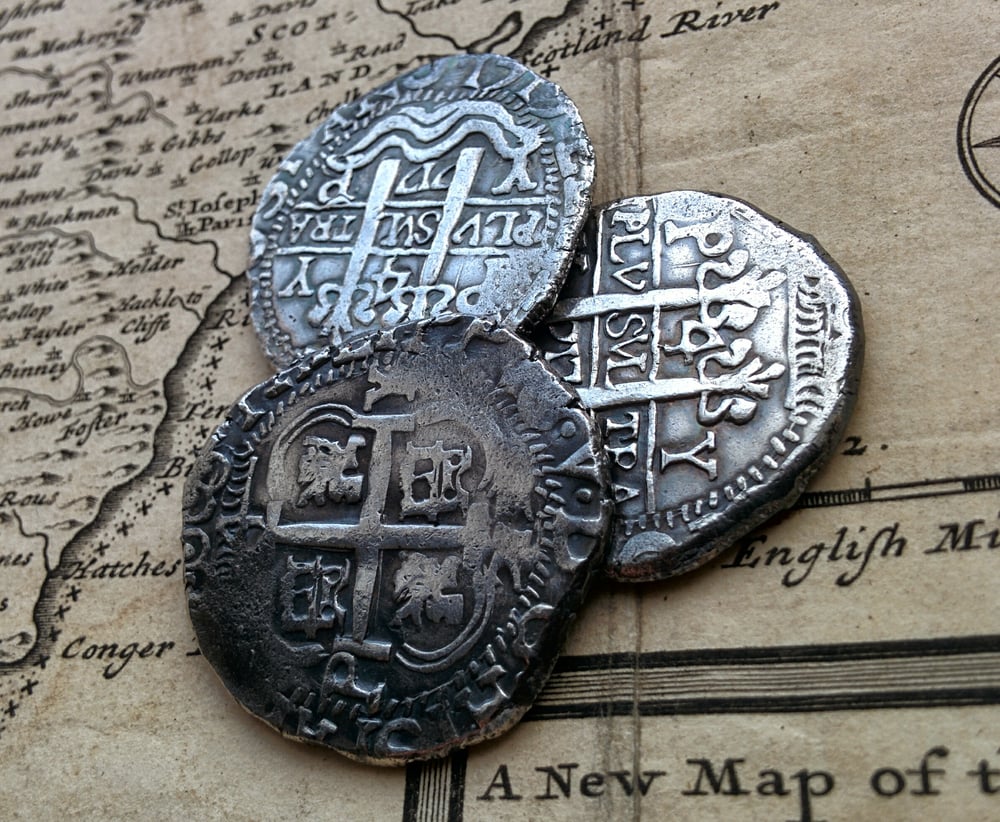 These 'pieces of four', are half the weight of the famous and giant treasure coins known as 'pieces of eight'. These coins would have been common in every tavern, shipyard, open market, or shady back alley deal in the 18th century Caribbean. One of these silver coins was worth about half a weeks wages for an able sailor in the Royal Navy. Wear it as a pendant, spend it on rum, or perhaps buy yourself a new pistol.

These are nice medium sized, yet bold statement pieces as pendants, capturing the imagination with azul Caribbean seas, home to lush emerald islands, filled with treasure to be had in the Golden Age of Piracy!

These hefty coins were hand struck in the New World, deep in the heart of South America. They have a handsomely rugged look to them and were never perfectly round or struck to capture every detail. They were hammered out in haste to legalize as much silver bullion for the crown as possible and to continuously fill the ever returning galleons headed for Spain.

These particular coins are marked by another story, a tale of two ships. They are dated 1717, the same year the pirate - Samuel Bellamy's ship the Whydah Gally (Galley) sunk off the coast of Cape Cod. It is the only conclusively identified pirate shipwreck and treasure. 1717 is also the year Blackbeard captured the slave ship he would make his new flagship, renaming it the Queen Anne's Revenge - the most terrifying ship in Caribbean waters during the Golden Age of Piracy.

- Hot struck from ~12-13 grams of 99.9 pure silver
- ~30mm in diameter
- Just like the originals, each is hand struck, so allow for slight irregularity and variance from the photos
- Each coin shipped outside of Canada is marked discreetly with a tiny punch on the back or side making it a legal 'replica'